From Airline Pilot to Hollywood Actor 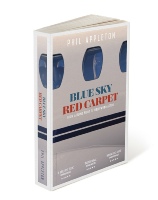 ‘The true story of an airline pilot's  remarkable journey of recovery from a devastating illness to a new career as an actor, and finding freedom again’

From flying a jet airliner at 30,000 feet to being locked away in psychiatric hospitals for five months, Phil Appleton lost his health, career, marriage, and home. Over 40 years, helped by encounters with people ranging from SAS soldiers, global superstars, and a terminally ill 11-year-old, he turned his life around in the face of rejection, disappointment, and failure, to be in the best time of his life.

In an engaging, poignant, and entertaining memoir, Appleton relates his experiences of perfectionist parents, a multi-cultural background to becoming a Star Wars pilot, exploring emotions, behaviours, and feelings common to us all.

With honesty, depth, and self-analysis, he gives a unique account of overcoming mental health challenges, finding release from bullying, racism, and discrimination through acting, writing, and exercise, while tackling stereotypes, labels, and mind-controlling drugs.

Offering insights on psychology, character, and self-help, Appleton demonstrates how with determination and patience, an individual may find their own answers to the shared complexities of the human condition.

Phil Appleton is a former British Airways pilot who began writing in 1981 following the loss of his health, career, and marriage through illness.

As the actor Philip Delancy, he played a Naboo Pilot in Star Wars: The Phantom Menace, and has credits on nine feature films, including Grace of Monaco and London Has Fallen. His TV work includes roles in Father Brown, Only Fools and Horses, and The Sooty Show.

Bilingual in English and French, Phil Appleton has delivered technical presentations in both languages, and consulted for major companies in drama-based learning. He has also been a window cleaner, a VIP Handling Officer, an encyclopaedia salesman, a legal interpreter, a customer service manager, and a TV presenter.

He was sent to Rome in 2014 on behalf of The Foundation for European Initiatives to deliver a workshop to international psychiatrists under the banner: Maximising Patient Outcomes Long Term and has worked with schools in helping young adults to improve their interview, presentation, and impact skills.

He divides his time between England and France as a writer, actor, and communications skills coach.

For more information on Phil Appleton, visit his website: